The Gozo Business Chamber participated in the Permanent Committee on Gozo Affairs on Tuesday 28th July 2020 that was held in the Maltese Parliament. The meeting of the Committee discussed EU funds and State Aid.

The meeting was first addressed by Paul Zahra, Permanent Secretary, Ministry for Foreign and European Affairs, and who is responsible for EU funds and State Aid. He explained the various issues relating to State Aid, and its applicability for Gozo.

During his intervention, Joseph Borg, President of the Gozo Business Chamber, mentioned Government’s announcement with respect to EU funds allocated to Malta for the next 7 year period (2021-2027), and the minimum 10% ringfencing  of the budget relating to  cohesion policy and agriculture that will be allocated to Gozo. While he highlighted that the agricultural sector is still a very important sector for Gozo, he also indicated that we must also look into different sectors such as the green economy and digitalisation. This is very important, in view of Gozitan ‘s present dependency on the tourism sector.

With respect to State Aid, Joseph Borg commented that there must be a different state aid framework for businesses operating on Gozo. This is due to the fact that enterprises which operate from Gozo, have a different cost structure from those enterprises operating in Malta. This is an argument which the Chamber, also through its Presidency of INSULEUR (the Insular Chambers of Commerce of the European Union) has put forward at a European Union level.  Gozo’s current situation does not apply only to Gozo but also to other islands in the European Union.  During this pandemic the EU has shown that it can adopt a flexible state aid regime that can cater for this unprecedented situation.  Such a flexible state aid approach must be applied also to islands.

Gordon Cordina (E-Cubed Consultants) presented to the Committee a paper commissioned by the Gozo Business Chamber and that had been presented during the General Assembly of INSULEUR on the 24 October 2020.  This paper argued for the fact the De Minimis state aid for islands should be increased from 200,000 to 500,000 euro based on specific sectors which are beneficial for islands.  Aid would also be tapered over a 7 year period so as to encourage enterprise to continue to innovate and to rely less on state aid as they continue to grow, and innovate.

One can view the whole meeting by clicking here.

Intervention of Joseph Borg, President of the Gozo Business Chamber 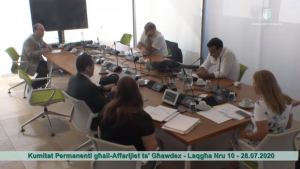 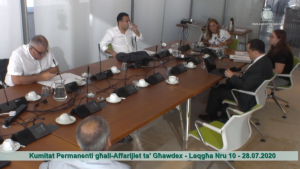 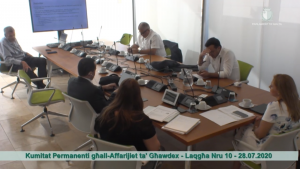