6th edition of the International Conference

The 6 th edition of the International Conference – “Making the circular economy and sustainable tourism a reality on islands: business models and financing opportunities” was held in Palermo on the 15 th October. The first Greening the Island Observatory Report was presented during the Conference. This included a general analysis on the European islands on circular economy and sustainable tourism, with specific focus on Crete, the Italian Egadi archipelago and the German island of Helgoland. A debate followed on the results of the study and on opportunities for public and private financing with particular reference to the projects and initiatives that have been identified on the mentioned islands.

The second part involved the European institutions and industrial associations on the subject of National Plans for Energy and Climate (NEPCs) and the role of the islands. The event in Palermo was an important step in the roadmap of the multilateral islands dialogue table with the European institutions launched by the CPMR Islands Commission and Greening the Islands with an event held in Brussels on June 18th with the support of the Committee of the Regions, where a joint declaration was presented containing some of the key points that the table asked to be included in the NECPs. The conference was organised in the framework of the General Assembly of the CPMR that saw the participation of over one hundred regional and island governments.

INSULEUR and GBC President Joseph Borg spoke in the round table on the GTI observatory report outcomes for islands development. Joseph Borg spoke about how INSULEUR can provide a good testing ground for the deployment of new technologies and initiatives, thus providing new opportunities for islands. He also appealed for islands to unite so that they can make their voice heard, and for them to apply for EU funded project together so that they can create better and more significant proposals.

Mr Borg also participated as a guest on the CPMR seminar on the circular economy and the role of regions which was also held in Palermo on the 16 th October. 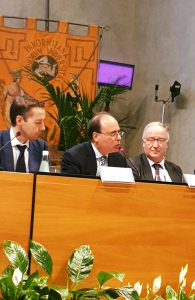